Most examples of data-associated maps use shapes with colored outlines and fill to delineate political or geographical boundaries. This type of map is called a “Choropleth map” and certainly has the most significant visual effect on users.

Incredibly, if you use choropleth maps (or intend to use them because you think they’re pretty), you’re probably doing it wrong.

When not to use a choropleth (or polygon) map

First, it is essential to note that there are two preferred approaches to displaying quantitative information on a map: variations in color intensity or size, or intensity and size.

The map of filled polygons below demonstrates the outcome of the 2012 US election. In blue, the states where Obama won, and in red, Romney. 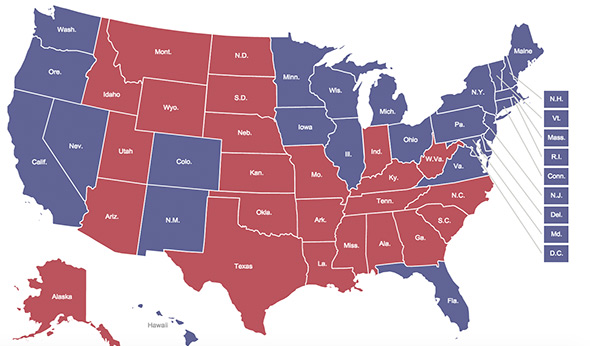 The result of the election we all know: The elected candidate was Obama (coloured in blue).

But this is not a conclusion that can be drawn from the map, because there are more red areas than blue areas; This leads us to believe that it was Romney who won.

In reality, the big confusion is that, when working with colored polygons, it is the area of the filled shape that jumps out at us.

Our eyes perceive larger areas than smaller areas, even if they are exactly the same color.

How to best use the polygon map

To correct the distortion created by the example above, a possible improvement would be to work with gradients: the higher the number of votes, the stronger the color shade (either blue or red, depending on who won that state).

Still, the area of each state causes our eyes to become confused.

The best alternative would be to work with circles on the map, varying color and size, so actual performance becomes clear (in this example it means a reflection on the number of votes and who won) at each dot on the map. 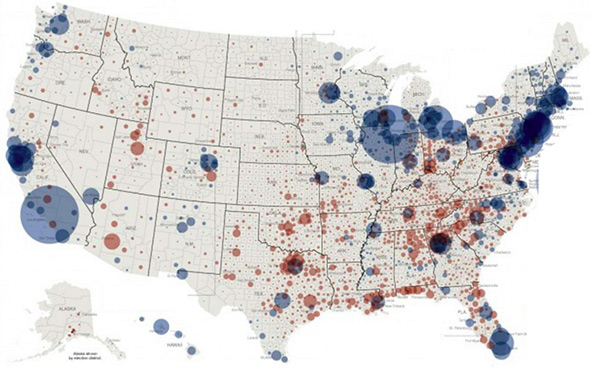 Qlik Sense offers a few tricks on how to build a clean and easy-to-read map. These are:

When should we use a polygon map?

As we said, in most cases, the map with circles will work best. But there are cases where polygon maps are more suitable:

If you want to learn more about this topic, below are some recommended contents:

The Atlantic – You Learn Something Every Day: “Choropleth”

Take Care of your Choropleth Maps

Be the first to know

Manage Cookie Consent
To provide the best experiences, we use technologies like cookies to store and/or access device information. Consenting to these technologies will allow us to process data such as browsing behavior or unique IDs on this site. Not consenting or withdrawing consent, may adversely affect certain features and functions.
Manage options Manage services Manage vendors Read more about these purposes
View preferences
{title} {title} {title}
Loading...